Author of The Blood Code: Unlock the Secrets of Your Metabolism (2014)

In my experience, weight gain is rarely the cause of an illness, like type 2 diabetes or hypertension and other heart disease risk factors. Instead, weight gain is the result of the real-cause culprit and center of gravity—a hormonal process that favors survival through a generous storage capability. A process driven by the hormone insulin.

Insulin secretion plays a huge role in your ability to make and store fat and glucose in the form of glycogen. But please note, Insulin Is a Gift, Not a Curse.

Migratory ducks and fatty liver. Pardon me for comparing you to a duck, but the physiology is similar. Ducks in my home state of Maine spend September gorging on the late-summer wild rice in the freshwater marshes. This behavior creates a disproportionately fatty liver in these very small teal ducks. By early October, they launch into the air and fly for more than a thousand miles without another bite of food during their journey.

Temporary fatty liver is desirable for this lifestyle; a problem only arises if the duck decides to live in a climate-controlled house for the next twelve months and eat three or more times per day. If you have high insulin, your inner duck must not gorge on carbs and remain active with long stretches between meals.

Good news! If you have high insulin, you are the most likely among your peers to experience a rapid and dramatic improvement in your weight and metabolism with The Blood Code ( https://www.amazon.com/Blood-Code-Unlock-Secrets-Metabolism/dp/0991218108 ) diet—which is the low carb high fat (LCHF) diet specific to your blood test results. Stay within your prescribed carbohydrate restriction and a full-body fitness routine that is strenuous for you and remember to workout on an empty stomach. You do not need to carbo-load . . . ever. You already store calories exceedingly well without the extra carb intake.

How do you find out your insulin, you ask?

It’s crazy easy really, but doctors usually don’t order it because it is hard to get insurance to recognize the test for reimbursement. I have the same re-imbursement problem in my office—labs send my office code rejection notices for tests like insulin, so I am thrilled with the ability to bypass the medical office and use direct labs. These are web platforms that let you order and pay for blood tests, done at a tremendous discount. The best price and platform that I have found is www.ultalabtests.com/bloodcode and choose the cheapest of the panels, the fasting Progress Panel covers everything.  It will tell you your insulin, glucose, fat storage as triglyceride, and your average blood sugar as A1c.

This week I saw a young, 19year old man who was at his doctor’s to correct weight gain. Two months’ prior, the doctor and nutritionist told him to eat more fruit and whole grains for the next two months—he gained weight. His doctor blamed him for cheating. It took nothing more than a blood test to show a blood insulin of 42 mg/dL – this means that dietary carbohydrates are quickly and efficiently turned into glycogen and fat. A simple Low-Carb-High-Fat diet was right for him.

A Case of High Insulin in a healthy, lean young man. Doug a thirty-one year old. His weight had drifted up a little over five years but not much. Mostly, he felt worse after eating and could not figure out the food-trigger—he suspected a hidden allergy. His reaction was not allergic in my assessment, instead, his insulin secretion following breads and grains resulted in a storage-state-fatigue…the opposite metabolic state an athlete wants for performance. The list of foods that trigger storage is termed “unfavorable carbs” in the book, The Blood Code. Three months after the first blood test – his diet corrected his high insulin and he felt the best in years.

His body fat improved too. Insulin triggers fat storage in the middle of the body, not in the arms and legs. Lowering insulin results primarily in fat reduction at the beltline as seen in Doug’s numbers. 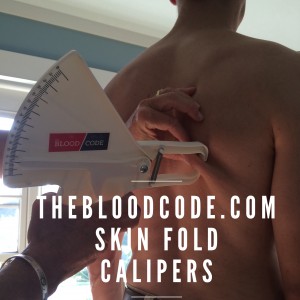 Doug simply followed a much higher fat and pretty low carb diet: <20 grams of carb at breakfast / 20–40 grams at lunch and dinner.

I don’t measure insulin in the blood as a weight loss program. I have lectured and written on the link between elevated insulin and cancers like melanoma and breast cancer, strokes, and dementia risk. Having a lower and more efficient insulin leads us toward a longer, healthier and more productive life. What’s your insulin?