It couldn’t happen in America—researchers would be sued, “You’re starving them to death” the nutritionists would say. I have not traveled to many places in the world, but I have yet to see any culture, anywhere, eat more than three times per day. Period. [If you have seen otherwise – please let me know: drmaurer@thebloodcode.com]. So it was a pleasant surprise when a U.S. Diabetes journal reported on a study that flies in the face of the American Diabetes Association’s recommendation of eating 6 times per day. Enter the Prague Study, which studied overweight type 2 diabetics.[i]

Participants all ate about 2000-2300 calories per day based upon their resting energy expenditure calculations—the calculation resulted in an equal amount of caloric restriction for everyone. One group ate it in 6 small meals per day; the other…only 2 meals—breakfast and lunch, two big meals.

The less frequent eating resulted in dramatic improvements in all parameters tested. Compared to the 6 meals per day, participants that ate twice daily were rewarded with:

Thirty years of a lie is hard to admit—so I don’t expect a retreat from the dogma of the American Diabetic Association and the American Dietetic Association. If someone is storing sugars really well and has a high tissue fat content, why feed them frequently? It’s like topping-off your gas tank every five miles – Most cars are designed to go 300-400 miles on a tank—Use it! A type 2 diabetic, or prediabetic, with high triglycerides and fatty liver is designed to go 600-800 miles on a tank full. It’s their primal inheritance and they must live in accordance with it.

Patients that hear my recommendation for 2½ meals per day panic if they habitually snack. But as soon as the higher dietary fat intake is implemented, success follows. Eating this way becomes easy. Every day for breakfast is about the same for me. If I exercise more aggressively, I will increase the amount of everything not just one foodstuff. This is my 1000 calorie breakfast [>70% fat / 20% protein / <5% carb] meal—an appropriate meal for me while averaging ½ to 1½ hours daily of metabolically demanding wintertime exercise—skiing, hockey and running. 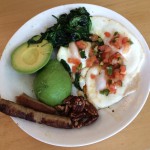 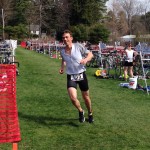 I will not be hungry for 6-8 hours and my brain and body feel and work at 100%. I eat this way not because I am overweight, but because I am in the familial category of the “Thin Diabetic.” I keep extra sugars in my bloodstream despite eating infrequently and with few dietary carbs—kind of a super power if you think about it. Set me up on the starting line and I will go for 2-3 hours of activity with only water to replenish—my brain and body are fed by the residual sugar that I leave behind so well.

Two or two-and-a-half meals per day is right for most people. Extreme athletes will require more frequent eating because their needs can top 4000 calories per day during training—this is not most of us. Thanks to the researchers for bringing our ancestral eating pattern to the research lab. Evolutionarily, grazers developed a ruminant digestive tract. Humans work for their meals and historically ate once per day in most locations. It is no surprise that infrequent eating helps those with high fat, elevated insulin (>8 uIU/mL on fasting blood test[ii]) and insulin resistance—they are the humans that have the best trait to store more and build more with less.

Read more in Dr. Maurer’s book, The Blood Code or at TheBloodCode.com

[ii] Maurer, R. The Blood Code: Unlock the secrets of your metabolism. March, 2014