Bacon—nitrate or nitrite-free—is it bad or good? I’ll be speaking at the PALEOfx Austin conference next week, nibbling on Bison and Bug Bars, so meat is in on my mind. Additionally, my wife Alexandra said she wanted to get a couple pigs for us to raise this year. So when a patient, Steve, wrote with the nitrite/bacon question—I had to re-visit the cured, fatty wonder, bacon.

I regularly speak at the Weston Price conferences and have heard Chris Masterjohn and Kaayla Daniel spell out the nitrite/nitrate myth at length. It goes like this—years ago, large-scale population studies using questionnaires discovered that people who ate the most processed meat tended to have more cardiovascular disease and some cancers that those who ate the least. Health authorities hastily had a field day making up unproven theories—it’s the salt…it’s the saturated fat…it’s that the meat is red…it’s the preservatives! It’s this last theory that put nitrates/nitrites on the list of taboo ingredients.

If you have followed dietary science, you know that salt restriction hasn’t panned out, saturated fat is not linked to harmful effects, and red meat isn’t associated with heart disease when researchers simply control for vegetable intake. So what about Nitrites and Nitrates—looks like that link is gone too.

A couple years ago Chris Kresser did a fine job covering this topic as well, you can check it out here: https://chriskresser.com/the-nitrate-and-nitrite-myth-another-reason-not-to-fear-bacon. 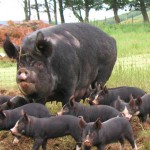 But what about the original association, about people that ate the most processed meat (and processed food for that matter) having the most risk of illness? Well, the link is still there, but it’s not due to one food ingredient. Perhaps it’s the fact that most processed meat is raised in industrial environments with industrial grain feeds. But I will refrain from coming up with other faulty theories. Bacon from a well raised, well fed pig, I suspect, provides a different risk profile. Whether sodium nitrite or nitrate-rich “natural” celery seed powder is added doesn’t matter.

Remember though, the association of processed meat and disease risk is still evident in statistics—so I won’t be in the highest 10% of processed meat intake. Subjects that ate the most processed meat ate the least vegetables. Therefore my meat intake will accompany ample veggies and will include whole, unprocessed cuts—skin-on and bone-in—from the healthiest farming conditions possible. Processed meats, such as saucisson, bacon and sandwich meats are minor players, condiments that add that awesome flavor and fat to my cuisine. [Look for any recipe using some bacon in a tray of roasted Brussels sprouts, Yum!]

The low-carb-high-fat diet from The Blood Code should move you toward healthier dietary practices, more veggies, more whole unprocessed fats, and possibly more meat and fish servings. That I use bacon and the residual bacon fat in my effective healthy diet is a mark of balance. Enjoy and Bon Appétit.