Why do Doctors Prescribe the Wrong Drugs for Diabetes?

As many of you know, I provide a rational program that can completely reverse type 2 diabetes. It’s actually easy. Which is part of why I am stunned by medical mis-management of type 2: the drugs used actually make the disease progress—they manage it at best. Cure and reversal is up to you. But what was this about doctors doing something wrong?

This particular study, published in WebMD, stunned event the Medscape authors—let me talk drugs for a moment, since that’s what WebMD is all about.

Medically, all physicians should know that Metformin is the least harmful medication to use for those with type 2 diabetes. And there is no doubt in the literature that this should be the first line of therapy when medication is considered. So WebMD was befuddled when 42% of physician respondents said they start with other medications as their first line. These “other” medications included three classes of medications that raise a person’s insulin production—medications with a side effect profile that includes high blood pressure, weight gain and a disturbing association with fatal complications.

So why would 42% of doctors, seemingly clever people, make the wrong choice? Disturbingly, the article was flanked by sexy ads for a non-Metformin diabetes drug that is “brand new” and a remarkably untested mechanism. I took a screen shot here. Perhaps doctors are vulnerable to the excessive advertising and marketing for the more expensive and profitable second-line and third-line diabetes drugs. You think!? 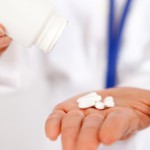 Even the least harmful drug, Metformin doesn’t work that well. Metformin traps the glucose that is stored in your liver and muscles so that it can’t be released. It’s like locking a screaming child in the closet and claiming that you, “Took care of the child’s behavior problem.” Metformin does not resolve diabetes—it hides it. The excessive glucose is still there, it’s just not circulating through the bloodstream as often. Metformin imposes a curfew on glucose.

So what do the other drugs do that is so bad? They raise insulin. And I have never met a physician that runs a patient’s baseline insulin level prior to prescribing a drug that raises insulin. Higher insulin in most people, causes more insulin resistance and type 2 worsens. It’s like yelling louder and louder to a child that is misbehaving. It might work initially (although I have three kids and I don’t think it works period), but once you start yelling, your problem only gets bigger. When your insulin is screaming high you will produce fat like it’s no one’s business. Baseline insulin is a blood test that costs under $35.00. See the Progress Panel at ULTA Labs. It’s simple. Nearly everyone I test has enough insulin to get the type 2 diabetes recovery job done. They merely need to find the diet and lifestyle that is “good enough” for them. Raising insulin beyond normal makes you sicker and in the “ACCORD” trial, these classes of medications were associated with an alarming rate of heart attacks and death. Your diet and fitness can be dialed in to match your insulin resistance. That is a huge part of what Your Blood Code tells you.

If you have a friend or family member with type 2 diabetes, let them know that their doctor may have them on the wrong medication—and that there is another way, without medication, to reverse high blood sugar and re-discover the healthy life they so deserve. The Blood Code is not about managing a disease, it is about discovering what you are capable of. Ready? –Richard Maurer