I have seen it in practice, athletes that become stronger after recovering and “rehabing” from an injury. I see it too in the science literature—people with torn meniscus in the knee are better off doing physical therapy and strength-based exercise without surgery compared to those who add arthroscopic surgery. And I have even seen it in my own life, with a severely torn hamstring that did not get better after one full year despite running and biking regularly for exercise. Finally, with only a few weeks of guided strength and power based exercises, my injury seemed to resolve. Why does babying an injury actually make it last longer or even get worse?

When you stress a muscle, you’ll know it with the soreness that takes place after a “hard workout” that you are not used to, the burning is attributed to lactic acid. And athletes and amateurs alike work to “get rid of the lactic acid” as quickly as possible. But maybe we are blaming the firemen for the fire.  In fact, the commonly held belief that lactic acid causes the muscular burn following strenuous activity is not true. Muscle lactate levels correspond to the acidity caused by the buildup of ions, in this case the excess Hydrogen ions.2 Surprisingly, the lactate is produced to help alleviate the tissue irritation from the excess H+ ion. Researchers conclude, “If muscle did not produce lactate, acidosis [from positive Hydrogen ions] and subsequent muscle fatigue would occur more quickly and exercise performance would be severely impaired.”

Take a second here. The very compound that athletes, trainers and doctors routinely blame for causing pain and burning is actually part of the natural cure. Training and exercising in a manner that produces lactic acid is likely beneficial well beyond sport – allowing your body to recover from destructive tissue acidosis, which results from inflammation, not just exertion. 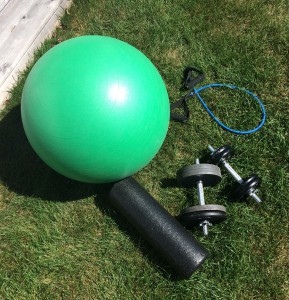 When there is inflammation or lack of activity and acidic, irritating, inflammatory ions are accumulating in your soft tissue, especially your muscles, a gentle walk may not be your cure. The research is continually pointing toward short bursts of strenuous exertion that causes your body to produce lactic acid and lactate – it might burn a little afterward but in this case, a little pain might produce the very gain you are looking for.

A simple workout if you do aerobic sustained activity: Do sprint intervals on an exercise bike, or sprints mixed in with jogging or walking, or interval sprints on any machine like an arc trainer or treadmill.  The sprint section should be 15-30 seconds long at FULL burst speed. then your recovery period should last about 1-2 minutes.